East Lynne Theater Company presents CHRISTMAS PRESENTS FROM THE PAST 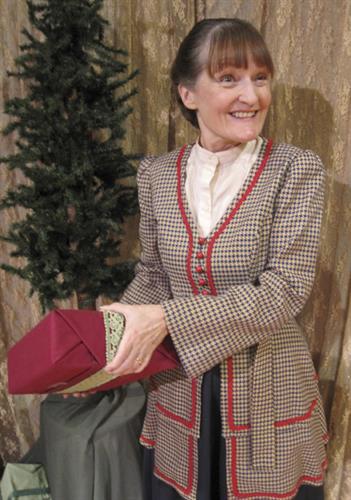 "One dollar and eighty-seven cents. That's all I have, and tomorrow is Christmas," sighed Della in "The Gift of the Magi," just one of the stories adapted and performed by Gayle Stahlhuth, who brings to life thirty-plus characters in her memorized, unique tour-de-force storytelling style.

For eight times only, the award-winning Equity professional East Lynne Theater Company presents "Christmas Presents from the Past.”  Aside from O. Henry’s “The Gift of the Magi,” in which a loving couple exchange unique gifts, the other tales are “The Christmas Masquerade,” “The Snow Image,” and “What the Bells Saw and Said.”

“The Christmas Masquerade,” written by Mary Wilkins Freeman, is about an unusual costumer. When children don his creations, they behave like the outfit, i.e., pauper’s children dressed as princesses behave like royalty, and banker’s daughters behave like shepherdesses.  Nathaniel Hawthorne is known for his supernatural tales, and “The Snow Image” is no exception.  Did Violet and Sam create a real child out of snow, or was it just their imaginations at work?  According to Louisa May Alcott’s “What the Bells Saw and Said,” the spirits of the city’s church bells gather every Christmas Eve to talk about the past year and their hopes for the future.

Stahlhuth has been presenting her solo Christmas shows for Cape May audiences since 2005, performing works by Zona Gale, L. Frank Baum, Mark Twain, Edward Everett Hale, Bret Harte, and Frank R. Stockton, among other. She has been praised by reviewers and audience alike for quickly shifting from one character to another with the flick of a wrist, the bend of the waist, the turn of the head, and a change in voice.

When asked about her process, Stahlhuth said, “I spend a great deal of time adapting the tales and committing them to memory, so I can have fun performing them, ever so freely onstage. I compare it to what musicians do when they know a piece of music so well, that they can come up with their own interpretations, and still be true to the original.”

This will be Stahlhuth’s final performance at The Cape May Presbyterian Church as Producing Artistic Director of ELTC.  Happily, she has other plans for 2023 in Cape May, New York City, ?and elsewhere. For over forty years, she’s been associated with the company in one way or another, and in 1999 was asked to take the reins when Warren Kliewer, the founder, died. Although her title is Producing Artistic Director, she also performed other duties including those of Marketing and Managing Directors.  Since her husband, Lee O’Connor died in 2021, has taken on the responsibilities of Technical Director, with help from Amanda Brinlee and others. Stahlhuth, with O’Connor, produced over 120 different shows for ELTC. In 2016, she was honored for her years of work in theater by The National Association of Professional Women (NAPW).  Stahlhuth is a member of the Dramatists Guild, SAG-AFTRA, and is in her 50th year as a member of Actors' Equity Association.

"Christmas Presents from the Past” performs on Friday and Saturday, Nov. 25 and 26, Sunday, Dec. 4, Thursday through Saturday, Dec. 8-10, all at 8:00 p.m. with 2:00 p.m. matinees on Saturday, November 26 and Saturday, December 10. The location is The Cape May Presbyterian Church, 500 Hughes Street, in Cape May, where the company is in residence. As usual with ELTC's Christmas shows, the company reduces its regular ticket price as a holiday gift to its audience. Tickets are $28 for general admission; $20 for full-time students and military (active, retired, veteran), and as always with ELTC productions, those ages twelve and under are free when accompanied by parents or guardians. For information and reservations, call ELTC at 809-884-5898 or visit EastLynneTheater.org.

Google Yahoo iCal (Outlook, Apple, or other)
Back to top